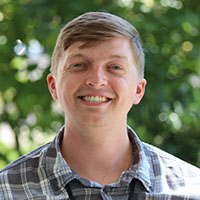 Jordan Olsen began working at Victory Academy in December of 2019. He earned his BS in Psychology from Brigham Young University in Provo, UT and has a MSc in Family and Child Psychology from the University of Chester in Chester, England.

Jordan has always had an interest in Psychology since high school after taking Intro to Psychology. From there, he found a passion for science and the study of human behavior, as well as the path to a career as a helper.

After completing his undergraduate degree, Jordan found his niche working with children with Autism as a registered behavior technician using ABA therapy with an emphasis in Pivotal Response Treatment (PRT). Once he found a way to use play and naturally motivating activities as an opportunity to teach, he was hooked!

Jordan loves the Victory Academy environment and the setup that allows for individual attention while also preparing the students for future group interactions at school and in the community. He loves teaching the students life skills, social skills, and a wider range of hobbies and interests that can help them find jobs and friends in the future.

In his free time, Jordan loves to go on walks with his wife and take their dog (Jetpack) to play fetch. He also loves to draw, make costumes for comic-con, watch TV, and play video games.