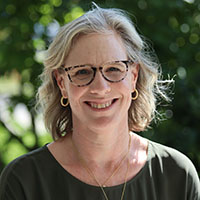 Fiona grew up in Eugene, Oregon and attended Pacific Lutheran University. At PLU, she received a Bachelor of Arts in History/Sociology but, after graduation, Fiona decided to pursue a career in nursing. She then attended Oregon Health Sciences University and was awarded her Bachelor of Science in Nursing, as well as her license to be a Registered Nurse. After Fiona and her husband Phil married, they spent a few years living and working outside of Oregon (Boston, Austin) before returning to Portland to raise their family. Now, they have three (mostly) grown children and live in Wilsonville.

After spending 22 years as a stay-at-home mom, Fiona was looking for a place to put her organizing and administrative skills to work. She deeply enjoys getting to know and serving each Victory student and their families, as well as supporting the staff.

In her free time, Fiona spends a lot of time spectating at her daughter's soccer games and track meets and enjoys serving at her church. She also loves coffee, trying new restaurants, and traveling.