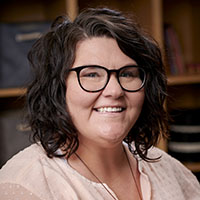 In January 2014, Kelly began working at Victory Academy as part of her graduate coursework in Applied Behavioral Analysis (ABA). She quickly became a Substitute Teacher and has been part of the Victory Team ever since. Kelly holds a bachelor’s degree in psychology and a master’s degree in ABA with an emphasis in Autism from Ball State University.

Kelly was born and raised in Indiana. She moved to Portland in 2013 to complete her graduate coursework and to soak up all the beauty Oregon has to offer. In her free time, Kelly enjoys playing board games, seeing live music, reading, and exploring the Pacific Northwest.

After school classes are now open to community children who are not currently enrolled at Victory Academy. Click here for details.

Victory Academy is hiring for the 2020-2021 school year. Click here for more information about open positions.

Check out this interview with three of Victory's Transition Program students!

Victory Academy is a non-profit, 501 (c)(3), approved by the Oregon Department of Education, and accredited through the Northwest Accreditation Commission, an accreditation division of AdvancEd.